A TRUE ATHLETE – THE KEYNOTE

After my Olympic Gold medal in the downhill of Sochi in 2014, my sister Michelle achieved the same thing four years later. In PyeongChang in South Corea on the 22nd of february 2018 she won the Olympic alpine combined.

Have a look behind the scenes of this extraordinary achievement. Take the perspective of two of the supervisors of this Olympic gold medal – our sport psychologist Dr. Christian Marcolli and me.

„A True Athlete“ – the new talk by

The keynote gives you an insight into the time after elite sports. My big step from the Worldcup circuit to studying physics at ETH Zurich, but above all the exchange of experience with my sister will be topics of this talk. Is it possible to pass on a fire? And what happens if two fires unite?

Here you can book our keynote

A TRUE ATHLETE – THE BOOK

What is pretty unique in sports history, two Olympic gold medals in a single sport, won by siblings, has inspired us to write a book in four languages (deutsch, français, italiano, english):

The story of the first Swiss Olympic champion in alpine combines – the formation of her speed abilities, the hopes before the Olympic downhill as well as the devastating crash in the finish area and the incredible performance 30 hours later.

MAKING IT HAPPEN – THE KEYNOTE

After winning Olympic Gold in Sochi I have been requested to talk about my career, the very beginning as well as the ups and downs of it, my training methods and my Olympic victory.

It is for this reason, I decided to create a 60-minute presentation suitable for all sorts of audience. Together with my sports psychologist Dr. Christian Marcolli, who has been helping me to build up my mental strength, I wrote a talk that provides insight into the world of high performance sports, especially the one of alpine skiing, and my way to the Olympic gold medal.

In my presentation I also draw parallels between areas in which top performances are demanded – such as sports, on the job or even in general. I hope to inspire my listeners to follow their path of success with persistence and willpower.

I am looking forward to share my personal story with you.

Here you can book my keynote

MAKING IT HAPPEN – THE BOOK

MAKING IT HAPPEN – From Engelberg to Sochi
(In English and German)

in collaboration with my sports psychologist Dr. Christian Marcolli. It is a book for everyone whose life has not been all sunshine and rainbows; for everyone who has suffered a setback, who has relapsed and is on the brink of giving up but is still fighting for their dreams. May this book give them confidence, hope and inspiration to always keep going and never give up.

The first and second edition of my book is sold out. You can now order the third edition for the first time in English too. 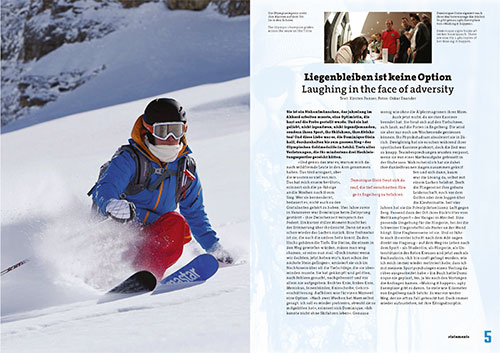 Laughing in the face of adversity
[engelberg Magazin, November 2015]